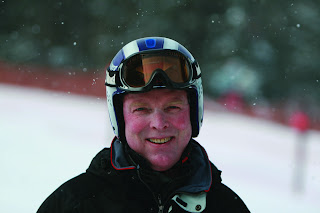 Many years ago when I was about twelve years old I was happily gobbling down a donut at a greasy spoon when a middle aged guy walked by and said “Enjoy that now, for you won’t be able to do that your entire life and get away with it.”  He was, of course, talking about the ability to eat whatever you want, whenever you want, without gaining weight.
Alas, those days have disappeared along with my original Rock Em Sock Em Robots game and 207cm straight skis.  So what does this have to do with skiing?  Everything.  In middle age and beyond, excess food finds a way of clinging to the human body.  Surprisingly, however, it does not greatly impede the ability to be a top-notch recreational skier.   Why?  Skiing is essentially a sport of active legs and a stable upper body.  While you need a balanced and stable upper body to ski well, the muscles that turn your skis are almost entirely in your legs.
Consider this fact:  65% of the average person’s weight is concentrated in the upper body, 35% in the lower body.
No fearless scientist has yet calculated if this is still true after we gorge ourselves on holiday treats in December – but I digress.  This is the mantra of the good skier:  “You ski with your legs, you balance with your upper body.”  In essence, that mantra is saying that you use your legs to turn your skis and your upper body to adjust your balance.  If it is not 100% true, it is essentially true and captures the spirit in which most recreational skiers should approach the sport.
Defining upper and lower body:  In layman’s ski terms, the lower body is everything from the ball joints in your hip sockets and below.  The upper body consists of our hips and everything above the hips (torso, shoulders, arms and head). If you stand up and simultaneously twist your feet to the left and right WITHOUT moving your hips and shoulders you can immediately feel the difference between the upper and lower body – the lower body rotates and the upper body remains stable.
The Problem:    Many recreational skiers use their upper bodies (hips and shoulders) to help turn their skis.  In other words, many people twist their hips and shoulders to the left to help make their skis turn left.  But if you are turning your skis to the left by rotating your hips and shoulders to the left, your skis will most likely be overpowered and the tails of your skis will skid sideways.  This also creates issues with your balance, because you are then turning your upper body uphill.  The last time I checked, we always turn downhill when we ski, so an upper body that is rotated uphill is in a very poor position to start a new ski turn.
The Solution:  Think about twisting (turning, rotating, steering) BOTH your legs to the left to turn left.  As was
mentioned earlier, practice this maneuver by keeping your hips and shoulders stable and facing straight ahead while turning both feet to the left and then both feet to the right.  This works especially well on any safe flat spot at the ski area while standing in your ski boots.  If you can turn both your feet (again, with your skis off)) without turning your hips and shoulders, you will create a shallow “bow-tie” looking impression in the snow under your ski boots.  If you can transfer that sensation into your ski turns, you are correctly using your lower body to turn your skis.  To be honest, you really need a lesson from an experienced coach or instructor to fully understand what I am trying to describe.  But if you think about turning your legs – instead of twisting your hips and shoulders – to get your skis to turn, you are grasping the essential concept.
Some historical perspective:  (French Royal Minister on the eve of the French Revolution)  “Madame Queen, just as you instructed, the butter-churning peasants are all turning their legs, not their hips or shoulders, to make ski turns in the French Alps.”    Queen Marie Antoinette’s cheeky reply:  Just as I suspected, they can gain weight and still ski well if they turn using their legs instead of their upper bodies – LET THEM EAT CAKE.”
While it may be true that you can’t have your cake and eat it too – you can have your cake and good skiing too.
Isn’t life grand?
Password Reset
Please enter your e-mail address. You will receive a new password via e-mail.