At 7:25am on February 2nd, down in Punxsutawney, PA, the famous Punxsutawney Phil emerged out of his quarters under a very overcast sky and failed to see his shadow, which supposedly set things in motion for an early spring, rather than the extra 6 weeks of winter that the skiers and snowboarders of Ellicottville prefer. 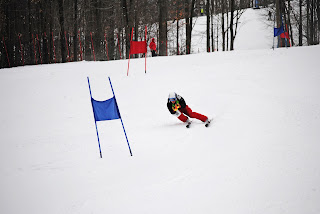 Well, we have now passed the six-week mark and winter has yet to step aside and allow spring to come through the door.  Quite honestly, we here at HoliMont couldn’t be happier.  Considering we are now nearing the end of March, the amount of snow left on the slopes is considerable (for anyone who has yet to strike last season from their memory, HoliMont was shutting down at this time last season) and the condition of the snow on the slopes is superb. 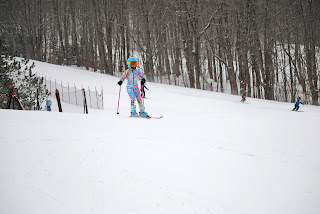 The weekend of March 16thand 17th was an enjoyable one for everyone at the Club.  The Jim Barker Memorial Club Championship Race took place on Saturday and HoliMont Members of all ages took to the slopes to test their speed against one another and see who was the fastest, most technical skier at the ’Mont.  Given HoliMont’s strong racing program it was a sight to watch some of the more competitive adults try to best one another’s times.  But it was the sight of the younger racers making their way around the gates that a lot of the crowd was there to see.  These young racers are the future of the Club and as such it was great to see their love for the sport showcased in an event that has very deep roots in the HoliMont community.  Club Championships used to be called just that but last year HoliMont lost longtime Member Jim Barker.  Jim was a fun, loving, energetic man who gave his heart and soul in everything that he did.  In the wintertime much of this heart and soul was devoted to the HoiMont Racing Program and the Club Championships was one of his favorite events so in his remembrance the Racing Program dedicated the Club Championships to him.  Jim would’ve been thrilled with what he saw last Saturday. 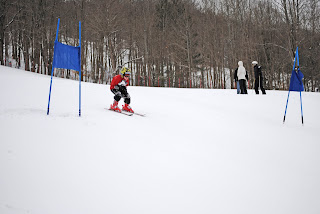 Also on Saturday, there was a slopestyle contest that the Terrain Park Crew put together.  It’s always fun to watch kids rip through the park but that fun gets stepped up a couple notches as soon as a section of the park is closed down for them, people are cheering them on from the chairlift above and music is pumping through the park.  The kids who came out for the competition showed off their skills by jibbing, sliding and spinning their way through a series of rails, boxes, and jumps.  More importantly, they all had fun, which is the whole reason for being out on the slopes in the first place. 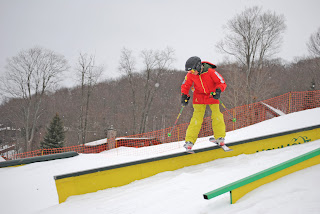 Moving forward, on March 30th, HoliMont will be holding its annual Pond Skimming event.  There is a lot of pent up excitement for this event, as it had to be canceled last year due to the fact that the ski area was forced to close before the scheduled Pond Skimming date.  This season there should be plenty of thrills and (potentially) lots of spills in this Member’s only “Las Vegas” themed event.  The spectacle starts at noon in front of the Main Chalet and the first 30 Members who sign up and show up in appropriately themed costumes, will get to vie for pond skimming bragging rights (or they will get a chilly bath). 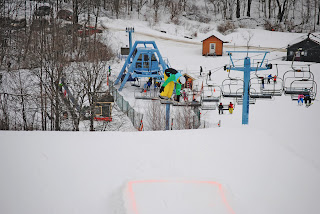