Despite the lack of help from Mother Nature, HoliMont officially opened for the season last Friday, December 23rd and all things considered the conditions were excellent.  So even though Ellicottville never morphed into the winter wonderland that most look forward to every year, HoliMont did its best to provide some added holiday cheer for the weekend.
“We only had a handful of really good nights of snowmaking to work with,” said Mark Burkhard, Mountain Manager at HoliMont.  “So we made a decision to hold off on opening in order to let the piles of snow that were created sit and cure.”
Patience was indeed a virtue as HoliMont was able to provide Members and guests alike with some prime corduroy to set an edge into.
“It’s Opening Day.  You always want things to go smoothly and give people a great experience but on Opening Day it’s that much more important,” said Burkhard.  “Sure, the weather throughout December wasn’t ideal but around here you quickly learn to work with what you are given.  Unfortunately, every season isn’t going to start off the way last season did so when we get a late start we put extra pressure on ourselves to make sure Opening Day is flawless.”
This season, Opening Day had a little extra sentimental value added to it.  It marked the last time that the current Exhibition fixed-gripped chairlift would be opening up the season.  Next season, which will mark HoliMont’s 50th Anniversary; there will be a high-speed detachable quad shuttling people up Exhibition, which will be a fantastic upgrade to the Club and an excellent way to commemorate the 50th year that the Club has been running.
HoliMont Members Frank Galloway, Kent Dixon, and his son Mitchell Dixon were the first skiers up the Exhibition Quad on Opening Day.  Kent Dixon repeated that feat when he was once again the first Member up the lift on the second day of the ski season.
Even with limited terrain open, Day 2 was as nice of a day as a snow enthusiast could ask for.  Throughout the morning the sun rose high into a perfectly bright bluebird sky, which lit up the snow-coated trees throughout the valley.  And while the HoliMont Membership was not out in droves, which is fairly typical on Christmas Eve Day, the ones who did make it to the slopes got treated to great slope conditions and a very aesthetically pleasing view from the top of Exhibition.  It was literally a picture perfect day at HoliMont.
Finally, on Christmas Sunday HoliMont was open from noon until 4pm.  An enthusiastic selection of Members and their guests came out for an afternoon on the slopes and had their commitment rewarded by being treated to limited lift lines and wide open groomed slopes to test their new Christmas gear out on.  So while many people were immersed in a sea of wrapping paper and Christmas baked goods some diehard skiers and snowboarders were out on the slopes getting their skiing/riding legs ready for, what we hope will evolve into, a very long and fun-filled season.
So if you love the snow we hope to see you here at HoliMont throughout the season.  Whether you are a Member, the guest of a Member or a non-member skiing/riding on a weekday we hope that you get the chance to truly experience HoliMont. 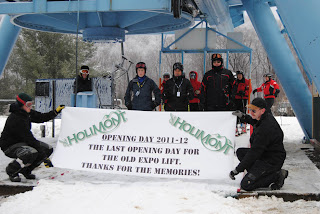