Kicking Off The New Year

Given the way that this ski season has started we can only hope that 2012 brings an entirely new, and much colder, weather pattern to Ellicottville.  After all, the New Year is supposed to be about making positive changes in your life and right about now a weeklong stretch of 10-degree temperatures and a couple of feet of lake effect snow would be a very positive change.
It’s not that there hasn’t been anything to celebrate thus far this season.  Up until we got snow last Monday the mere fact that HoliMont had enough coverage to make it from the top of the hill to the bottom, much less enough to warrant having features up in the terrain park, showcased what a great job the snowmaking crew has been doing this season.
The morning of Monday, January 2nd, Ellicottville woke up to a glorious sight.  Approximately 5 inches of fresh snow had accumulated throughout the night, which added a drastically needed characteristic to the landscape of the town.  And just like that, the ski-town vibe was back on track.  It was as if an entirely new season had begun…
Speaking of which, the HoliMont New Year’s Party took place last Saturday night.  Organized by HoliMont Member Liz Laube and her family the party was an all-out-family-affair and for the nearly 300 participants was a great way to say goodbye to 2011 and hello to 2012. 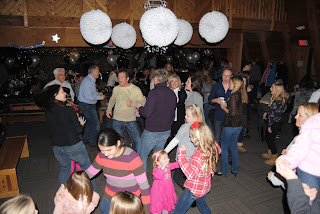 There was an arts & crafts table set up where the younger crowd worked on bringing out their inner-creative genius.  Nearby a flat-screen TV played an assortment of child-appropriate animated movies throughout the night.  The upstairs portion of the Chalet was transformed into “The Loft” where the pre-teen/teen crowd spent much of the evening rocking out with Rock Band. 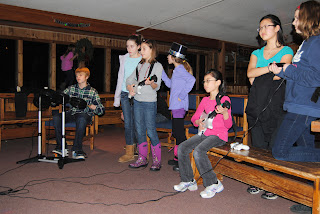 Dina’s at the Mont organized a delicious pasta buffet that left everyone feeling stuffed…or possibly it was the dessert selection that did that.  And in the front of the Chalet the DJ had the tunes pumping where people danced the night away without a care in the world.
When the first countdown began (there were three of them throughout the night so as to cater to all age groups) the Chalet exploded with the sound of festive celebration.  It was clear that everyone was in the mood to party and looking forward to 2012.  And why not?  2012 is looking like it’ll be a fantastic season at HoliMont.  Hopefully your year will be the same! 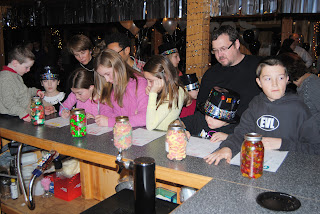