Keepin’ it safe in the parks at HoliMont 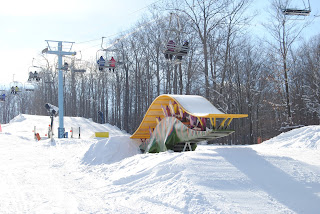 We are now in the tail end of National Ski Safety Awareness Week; a time where ski areas across the nation put that little bit of extra emphasis on making sure that their guests stay safe while on the slopes.
Here at HoliMont, where safety is always of the utmost importance, Area Control Manager Justin Latimer and his staff have been diligent in their efforts to spread the good word of safety.  One of those areas of emphasis has been terrain park safety.
If you’ve spent any time watching the X-Games lately you know that the world of snowboarding and freestyle skiing is now reaching stratospheric levels.  These guys and girls make boosting off kickers, and out of the pipe, look like it’s no big deal.  Just watching their athletic endeavors is enough to get your adrenaline pumping.  Unfortunately for us mere mortals, these feats are accomplished by seasoned professionals who spend hours every day training in order to master their skills.  And even with all of their hard work and dedication, sometimes, bad luck sets in.
Sadly, just over a year ago, the freeskiing community lost a very beloved member due to a totally random accident.  Sarah Burke was seriously injured while training on the Park City Mountain Resort Eagle superpipe in Park City, Utah.This was the same pipe where snowboarder Kevin Pearce was seriously injured in 2009.  After nine days in a coma, Burke succumbed to her injuries on January 19, 2012.
As fun as the snow sports that we all love are, the reality remains that there is an element of danger in skiing and snowboarding.  And while HoliMont does everything it can to ensure that its members and guests are as safe as possible, safety cannot be guaranteed.  With that said, HoliMont continues to pursue more ways to make the area safer.  A couple of seasons ago we implemented  “Smart Style” signage in the terrain parks.  Smart Style is a Terrain Park Safety initiative that was developed by the National Ski Area Association (NSAA) and Burton Snowboards.  The goal of the initiative is to continue the proper use and progression of terrain parks at resorts, while also delivering a clear, unified, concise, and effective message.
To further the educational aspect of Smart Style NSAA also teamed up with the Professional Ski Instructors of America (PSIA) and the American Association of Snowboard Instructors (AASI).  Together they came up with a Get Smart consumer informative video.  The video encourages park users to abide by the four points of Smart Style:
The video also highlights the concept of ATML, which is all about looking at a terrain park feature in four steps:
For years HoliMont has mandated that terrain park users wear helmets but a few seasons ago the safety bar was raised another level.  The HoliMont Terrain Park Crew started offering a Smart Style training where people could watch a Smart Style video and then take a short test.  After passing the test, skiers/riders got a sticker to put on their pass.  That sticker signified they were familiar with Smart Style and knew the proper terrain park etiquette.
“We’ve had a tremendous interest in our terrain park program, which as a result has really increased our safety awareness in the parks,” said Latimer.  “Statistically, our injuries have decreased ever since we implemented the program.”
The Smart Style test program is voluntary.  However, HoliMont is looking to make it mandatory in the near future.  So when you visit HoliMont this year take the test and get your Smart Style on.  You’ll be glad you did…and so will the other people in the terrain park.
Password Reset
Please enter your e-mail address. You will receive a new password via e-mail.