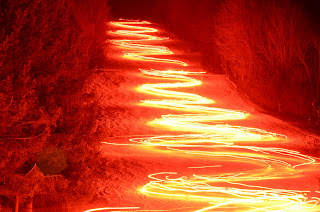 Friday, March 8th, was one of those occasions.  That night, during the weekly Friday Night Fish Fry at the Chalet, over a hundred HoliMont Members of all ages gathered together at the base of the Exhibition Express lift in order to participate in the torch light parade that (weather pending) generally kicks off the Mardi Gras weekend.
It was a perfect night for a parade and the spectators, both in and outside of the Chalet, were treated to an astounding sight as the HoliMont Safety Patrol, headed up by Safety Manager Justin Latimer, led the long line of torch-wielding Members from the top of HoliMont, down Exhibition and to the base of the Chalet.
The parade was over in approximately 10 minutes but in that short timespan memories were created, friends were made, and some lucky Members got to do what nobody else gets to do; ski the slopes of HoliMont at night.
Password Reset
Please enter your e-mail address. You will receive a new password via e-mail.