February 26th – 28th was an exciting time for the HoliMont Racing Program.  For the second year in a row HoliMont played host to a FIS Nor-Am Cup Snowboard Race.  Last season was the first time that such an event has ever been held in Western New York and the competition that took place was incredibly intense. 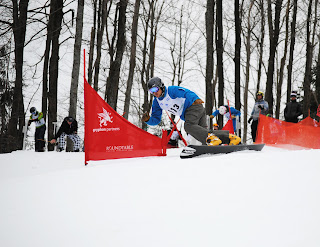 Alpine racers from all over the United States and Canada traveled to Ellicottville to take part in the event and when it was all said and done, Ellicottville did not disappoint.  Mother Nature did her part by providing two solid days of racing weather.  The HoliMont groomers did a great job of making sure that Fall Line was groomed above and beyond FIS standards.  On top of spending a lot of time making sure that the timing system was dialed down to the smallest hundredth-of-a second the HoliMont Racing Program did its due diligence to ensure that the course was both fast and challenging.  The Racing Program also organized a great group of passionate volunteers to help out with all of the behind-the-scenes work; and rest assured when FIS points are on the line there is plenty of work to be done.
“The riding caliber of these athletes was amazing,” said Travis Widger, HoliMont’s Racing Director.  “Coaches showed up with an all-hands-on-deck approach.  Athletes, parents, coaches and officials alike were all very appreciative and impressed with our quaint little club nestled in the foothills of Western New York.  I had numerous participants compliment HoliMont on its venue, facilities, staff, and amenities.  What a great race, which can be attributed to the hard work and dedication from all who make this possible.  Thanks to all!”
Competitors arrived on Sunday the 26th and took the day to check out the terrain they would be racing on.  The race itself took place on Monday and Tuesday.  It featured a Parallel Giant Slalom Race on Monday and a Parallel Slalom Race on Tuesday.  In the finals the top men and women competed in a head-to-head elimination format to determine the winner. 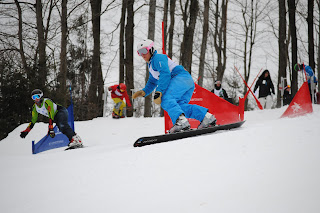 Just like last season, this event brought out some heavy hitters in the world of snowboard racing.  Canadian National Team racer Matt Carter made the trip down to HoliMont, where last year he was able to secure a podium spot.
However, once again it was the presence of Canadian racers Darren Gardner and Megan Farrell that HoliMont was most excited about.  Not only do Darren and Megan both race for Team Canada but they are also both children of HoliMont members and thus have spent a lot of their youth on the slopes of HoliMont honing their skills and developing their love of snowsports.
In the Women’s Division Canadian Marianne Leesontook 1st place on Monday.  Meghan Graham of the USA and Ariane Levigne of Canada took 2nd and 3rd respectively.  Megan Farrell just missed the podium by finishing in 4th place.
In the Men’s Division, Monday saw Canadian Matt Morrison finish in 1st place.  Steve Barlow of Canada and Darren Gardner took 2nd and 3rd place respectively.
On Tuesday, Marianne Leeson of Canada took the top podium spot.  Meghan Graham of the USA and Megan Farrell finished 2nd and 3rd respectively.
Matt Carter showcased his competitive drive and walked away with a 1st place finish on Tuesday.  Darren Gardner brought some excellent consistency and once again captured the 2nd place spot on the podium.  And the USA’s Converse Fields rounded out the podium in 3rd place.
HoliMont is extremely proud of Darren and Megan and wishes them the best of luck in their racing careers.  The Nor-Am event was an amazing experience for everyone involved and HoliMont is looking forward to having the opportunity to host more Nor-Am events in the future. 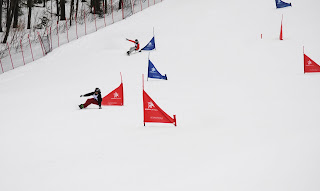