Get Some Hero Snow At HoliMont

This season the term Hero Snow has been thrown around with reckless abandon.  The reason for this is that we have had, in case you haven’t noticed, an unseasonably warm winter, which has resulted in a fair amount of warm days filled with bluebird skies.  Between the warmth and the sun we have experienced an above average number of Hero Snow days. 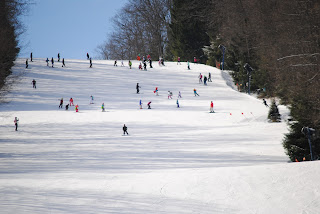 For those of you not familiar with the term, “Hero Snow”, according to urbandictionary.com, is “a condition of soft slushy snowpack most common in spring skiing. The snow provides an excellent base for turning making anyone (even nubes) feel like “heroes” while banging out turns. Also causes wet clothes after falls which can lead to wet wallets, ruined phones and cold skin.”
Normally Ellicottville doesn’t see a lot of Hero Snow until the end of the season but this year it’s made a fair number of appearances already.  And now that we are officially into spring skiing weather it’s your last chance to take advantage of this fun and forgiving snow.
So put on your sunblock, find your favorite t-shirt to ski in, go to your favorite downtown shop and ask them for their best warm weather wax, and then hit the slopes as often as possible because before you know it the Hero Snow will be gone…leaving you with thoughts of turns you had yet to make and tricks you still wanted to try.
Password Reset
Please enter your e-mail address. You will receive a new password via e-mail.