To quote The Rolling Stones, “You can’t always get what you want but sometimes you get what you need.”  Ellicottville wanted single digit temps the day after Thanksgiving but that didn’t happen.  Luckily for HoliMont, what we have here is exactly what we need.   When Mother Nature isn’t willing to play nice and give us an abundance of lake effect snow we have what we consider to be an even better resource.
The Mountain Crew at HoliMont consists of a dedicated group of snowmakers who, day and night, brave the potentially inclement weather to ensure that HoliMont Members and guests not only have a great start to the season but also that the season lasts as long as possible.
Snowmaking is a science and a lot of preparation goes into making sure that all of the equipment runs efficiently and effectively.  That preparation is instrumental when it comes to starting the season.  In fact, if not properly managed it can make or break an entire ski season.
That’s where the Mountain Crew at HoliMont comes into play.  Throughout the off season the crew tests and retests all of the water lines and mechanics of the snowmaking guns so that when the time comes everything will work with precision.
The Snowmaking Crew consists of three different shifts and each shift plays off of one another to streamline the snowmaking process, which in turn helps to cover as much of the area as possible in as fast of a timeframe as possible.  There is no doubt about it; making snow is a relatively thankless job.  It is difficult work in less than ideal conditions and quite often Mother Nature gets all of the credit for the snow that is covering the hills.  Thankfully the men that make up the Snowmaking Crew at HoliMont are not in it for the notoriety or glory.  They do it because they are a special breed of individuals who come together as a team so that the skiers and snowboarders at HoliMont can enjoy the Western New York winter season.
At midnight on December 7th the guns were fired up for the first time and by morning there was a nice carpet of snow on the targeted hills at HoliMont, which was an amazing sight for those who were sick of seeing grass on the ground in December.   After a couple of weeks of inconsistent weather and many days where the temperature was not ideal for making snow HoliMont officially opened for the season on December 23rd.  Had it not been for the dedication of the Snowmaking Crew that feat would not have been possible, as natural snow was more-or-less scarce at that point.  By waiting until the 23rd HoliMont was able to preserve snow for the Christmas week and work on building up a solid base of snow, which is a necessary component to ensure a long and prosperous ski season. 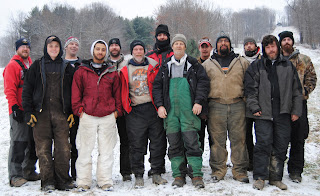