You may know who he is and what he’s been through, but if you don’t, it’s a story worth hearing.  It’s one of sheer determination, hope, faith and the power of family and friends when the unthinkable happens. And because of all of those things, it’s also a story about recovery.
On Friday February 17, 2012, I was privileged to witness an incredible event on Chipmunk, HoliMont’s bunny hill.  Yes, that’s right, the bunny hill. You see, I wear one of those red jackets, the one with a white cross and a radio.  Thankfully Holimont Patrol radio activity is mostly routine coordination. But one year ago on February 19th, the voices over the radio were different.  I can’t remember the exact words, but I can still feel the urgency that was in them.  That day Nick, then a 13-year old boy from near Cleveland, Ohio, was at HoliMont with family friends but wasn’t able to meet them at the bottom of Exhibition, a blue run, as planned.  He was in the trees; unconscious and suffering from a traumatic brain injury.  Was he skiing out of control? No.  Was he a beginner, No. And yes, he WAS wearing a helmet.  It was just an accident, an accident of the worst kind.  He doesn’t remember what happened, only that he was making turns and then he was in the hospital.
I was not at the scene on the hill that day, but I was part of the rescue team in the patrol room.   The patrol I am honored to be a part of was/is incredible and did everything possible to save his life.  The outcome far exceeded anyone’s expectations.  Nick Ventura walked into our patrol room on Friday February 17th and it brought tears to our eyes.  As we talked with him, his father and his friends, Nick stood over the very place where he laid on the floor one year ago.
We guessed at his age that day, as all he had on him was his phone. It was locked. We didn’t know his name or whom he was with.  His friends were looking for him at the bottom of the hill, then at the top, and couldn’t imagine where he actually was.  Eventually we got the phone number for his parents. But a horrific phone call had to be made…  “It’s his only son!” was what we heard next. The Ventura’s were in the grocery store near their home when they got the call.  They dropped everything, got in their car and immediately drove North with only the clothes on their back. There was no time to go home for they didn’t know what they would find when they got to Buffalo.
Winds were too strong for Mercy flight that day so he was rushed via ambulance to Women’s & Children’s Hospital of Buffalo where they performed emergency surgery on arrival. He had a fractured skull and four significant contusions in his brain.  The next several days were difficult, survival and what level of a recovery would be possible was in question. Nick remained in Buffalo for a little over 5 weeks in the pediatric intensive-care unit, most of it in a drug-induced coma. His parents stayed in housing nearby and started a web-journal so friends and family could get daily updates and send prayers. After somehow surviving those first few weeks, he was allowed to go home to begin rehabilitation at the Cleveland Clinic Children’s Hospital.  At that point he was still unable to walk or talk.
After months of grueling therapy, Nick continues to work on his speech and has some problems with short-term memory, but has returned to school. Nick gets A’s and B’s and is Student Council President.  He came back to HoliMont one year after that near fatal day to take another big step in his healing process.  Not only can Nick walk and talk, he can put on his snowboard boots, board and ride!  His dad tried to prepare him in case he couldn’t do it.  To which Nick said, “I can do it.”  And on Friday, Nick Ventura rode his board down Chipmunk and made some turns, some really, really sweet turns and on Saturday it was even better.  Nick rode down Sunset with several of the patrollers that saved his life and made some more really sweet turns. 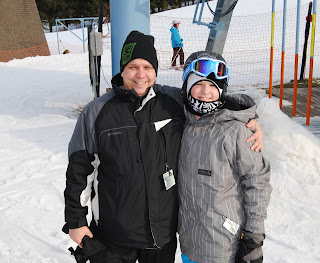 The 11 Foundation was created in honor of Nick by his family to help support other families with TBI and the medical expenses they incur during the recovery process.  Check it out. www.11foundation.org
As a patroller and the mom of a 13-year old girl, I ask you to please wear a helmet and always make sure your kids, no matter the age, carry ID & contact information and don’t forget it yourself if you are out on the slopes alone.  Never give up on someone and never give up on yourself, because you never know what tomorrow will bring.  It could bring some really sweet turns that you just can’t imagine today, Nick Ventura is living proof.
Sherry Hartel
Holimont Ski Patrol
Password Reset
Please enter your e-mail address. You will receive a new password via e-mail.