A Very Social Month For A Social Club

It’s been a very busy month at HoliMont in terms of social functions and festivities.  On top of the normal weekend après ski parties that HoliMont Member’s are accustomed to, the month of February saw Men’s Day, the 50th Anniversary Gala, and most recently, Ladies Day take over the Chalet.
Friday the 1st was HoliMont’s annual Men’s Day event where male Member’s brought their friends to the Club for a day of fun on the slopes as well as in the Chalet.
The guys planned the event for the right day, as the weather was superb for being out on the slopes.  Based on the stories being told in the Chalet during the breakfast portion, there were plenty of guys who had a great night out in Ellicottville Thursday evening.  After breakfast most of the men took to the slopes for a morning of pristine runs and plenty of fun.
Once again, the Buffalo Bills went above and beyond and donated some great Bills gear for the Men’s Day raffle.  Corbetts Ski & Snowboard also kicked in with some awesome prizes, including a pair of skis.
After lunch it was back to the slopes for most of the guys.  The rest just hung out around the Chalet and took advantage of the laid back atmosphere.  Eventually, Comedian Steve Burr took the stage and entertained the crowd for the rest of the afternoon.  When Burr’s set was complete, another successful Men’s Day was in the books.
Two weeks later, HoliMont’s 50th Anniversary Gala was a huge hit with the HoliMont Membership.  The Chalet was filled with people looking to celebrate HoliMont’s history…and celebrate they did!  Dinner, dancing, fireworks; the night had it all and when it was all said and done everyone left feeling very positive about the future.
One week later the ladies of HoliMont completely took over the Chalet with their Back In Blacktheme.  Just like the men, or perhaps even more so than the men, a lot of the ladies were out living it up on the town the night before.  But no matter how late they were out they still showed up in droves the next morning to commence with the party. 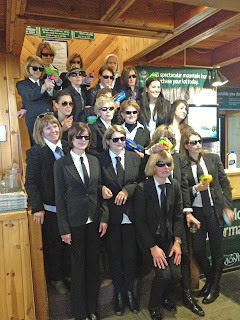 Not surprisingly the vibe in the Chalet for ladies day was much different than for Men’s Day.  Having a nice day out on the slopes was definitely an added bonus for the ladies but it was the in Chalet activities that really had the women excited. 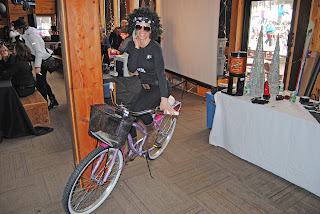 As always, Dina’s provided a delicious breakfast spread that had a fantastic aroma floating throughout the Chalet.  Upstairs in the Chalet a vendors market was set up where approximately 15 different shops were showing off some of their finest items.  From handbags, to clothing, to jewelry, and a lot more in between, there were ample opportunities for the women to purchase some very unique products. 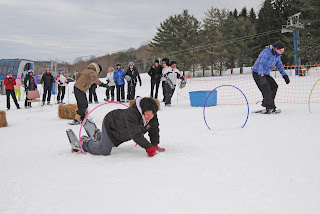 The final thing on the agenda was a DJ spinning a great selection of party beats so that the ladies could spend the remainder of the event dancing the afternoon away.
HoliMont would like to thank Dekdebruns Ski Shop, The City Garage, The Boardroom and Mud, Sweat n’ Gears for coming to HoliMont to provide free ski and snowboard demo’s for all the participants of Men’s and Ladies Day.
Events like Men’s Day, the Gala, and Ladies Day are just a couple of the many reasons why membership at HoliMont is such a worthwhile decision.  Every winter great times are had, lifelong friendships are forged and of course there is always some very fun skiing and snowboarding out on the slopes.
Password Reset
Please enter your e-mail address. You will receive a new password via e-mail.